Christian Science was introduced to us by a friend of my husband's just over eighteen months ago. Since then we have had healings of colds, sick headache, and sprained ankles; our needs have been met and difficulties overcome as we have held to the truth of God's being and ever-presence. A beautiful healing of my daughter took place with the help of a consecrated practitioner. She had every symptom of brain fever and had not been able to sleep for several nights. This was quite alarming and she seemed so ill I decided to stay with her. All night we worked as we are taught in Christian Science, repeating "the scientific statement of being" (Science and Health by Mrs. Eddy, p. 468), the Lord's Prayer with its spiritual interpretation (ibid., pp. 16, 17), and the ninety-first Psalm, and singing what we could remember of Mrs. Eddy's hymn (Poems, p. 14), "Feed My Sheep." Toward early morning she fell asleep and slept until three the next afternoon. When she awakened she was more like herself and was quite well again in a fortnight's time.

Some time ago my husband was cured of lumbago in three days by just holding to the truth and knowing that man is made in God's image and likeness.

Send a comment to the editors
NEXT IN THIS ISSUE
Testimony of Healing
"Thank You, dear God, for all... 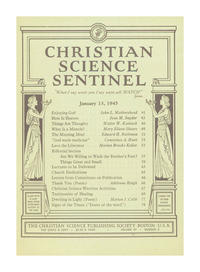