The human mind may feel at times that it has to give up something desirable or worth while in order to attain a higher religious sense. Christian Science changes this viewpoint, and shows us clearly that true sacrifice is joyous, helpful, and most desirable. It invariably improves our status, bears us onward, and leads us forward to greater and higher attainment. In its primary sense, the word "sacrifice" means to make sacred. It may be thought of as that which brings us into holy, hallowed association with the divine.

Send a comment to the editors
NEXT IN THIS ISSUE
Article
What Are Our Motives? 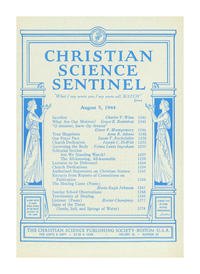