When Christian Science was introduced...

When Christian Science was introduced to me about twelve years ago. I was suffering from heart trouble and a stomach ailment. These ills had resulted in a nervous breakdown, by which I had been dominated for about two years, although I had consulted some of the best physicians who could be found in our city. I was treated several times a week by them but with no permanent results.

I had given up hope of ever being cured, when Christian Science was brought to my attention by a relative who had received some healings through the study of the Christian Science textbook, "Science and Health with Key to the Scriptures" by Mary Baker Eddy. I started to read the textbook on a Sunday morning, and read it all day, resting occasionally and stopping to eat my meals, which incidentally I enjoyed more than I had for many months. I arose on Monday morning, not completely healed, but with a much brighter outlook on life. I called a practitioner and asked her to help me. Gradually I started to gain in health as my thought changed from a material to a spiritual basis. In two weeks I was able to go downtown to the practitioner's office. In a month I was able to open an office in which to transact my business, which had been greatly depleted during my illness. I continued to study and gained a little each day until my health was completely restored. I wish to add that the stomach trouble had held me in subjection for forty years.

Send a comment to the editors
NEXT IN THIS ISSUE
Testimony of Healing
After many years of blessings... 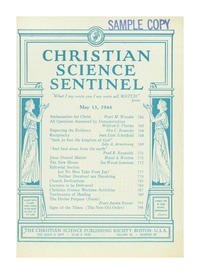