A Young man entering the Army was sent to a midwestern camp, far from all his friends in the East. It was a completely new environment, among thousands of strangers. This young soldier took with him the equipment that Christian Science gives the earnest student. Day by day he had been striving to "put on the whole armour of God," so that he might be ready to stand. He had been fortifying himself with practical spiritual understanding, and he faced the new life bravely.

One of his first contacts was with an older man who had been extremely rebellious that he had been obliged to leave his home, a good business, and all his other interests. This new life had embittered him. He was resentful to the point of desperation. 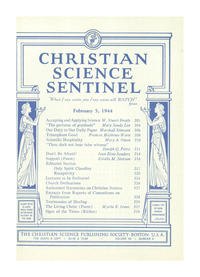