Peace on Earth Is God's Will for Men

The unbridgeable abyss between the material and the spiritual concept of man is illustrated by a statement recently made by a prominent biologist. "Man," he says, "is the only organism whose mind is so constructed that conflict is inevitable." The concept of man which this biologist accepts can never hope for peace. He was doubtless thinking of man as an aggregate of material atoms, whose mind is filled with selfishness and human will, and he saw no way to displace this concept with a higher one. A more hopeful view of the possibilities of man was expressed by a late leader of world thought thus: "The great undertaking of our time is a spiritual undertaking. It is to discover the spiritual basis for oneness among men." This thinker was seeing something of the spiritual fact—God's fatherhood and man's brotherhood—wherein all men understand one another, love one another, are just to one another, and live in lasting peace.

If one accepts the premise that man is merely a product of material germination, embodied in matter, and governed by relentless, negative, materially mental forces, the outlook for humanity, as the biologist avers, is hopeless, and progress a mockery. But if one sees how contrary this concept of man is to a supremely intelligent cause, and is willing to open his thought to the spiritual idea of God and man, a vista of the greatest hope, promise, and achievement appears. In the degree that men understand the Christ-idea, God's spiritual manifestation, they find peace within themselves, as did Jesus, and give out peace to the world. 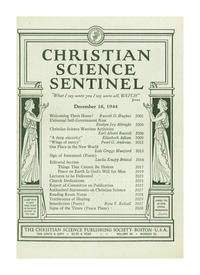