How We May Help

Considering the present extremity in human affairs, the question is earnestly asked by willing persons, "What may I do to help?" In the tremendous preparations to supply the needs of men upon the battle fronts the contributions of those who remain at home are not confined to the production of material things. While material preparations and an ever-increasing flow of goods are essential to victory, the sense of spiritual power to effect a successful conclusion of the conflict should constantly increase. Scientific thought, as understood in Christian Science, is highly important. And in this spiritual thinking everyone can help.

Historical incidents furnish convincing proof that the battle is not necessarily to the materially strong. Elisha prayed, and the eyes of his servant were opened to discern help from on high, which appeared as the mountain full of horsemen and chariots of fire. Through this realization of the immutable power of God, Spirit, the enemy was rendered helpless and was unable to accomplish its evil aims. Elisha said, and proved, "They that be with us are more than they that be with them." At another time, when Samaria was besieged and in famine, the Syrian army retreated in the night, believing that they heard the sound of approaching armies. 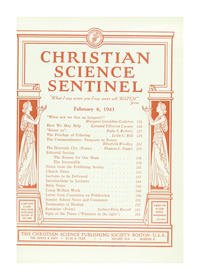