Why Am I Safe?

Christian Science insists that man is in possession of the qualities that he has inherited from his heavenly Father, and it is inconceivable that one should ever think for a moment that God would imperil His own son with such conditions as danger and insecurity, because God is infinite good and the source of all good. In "Science and Health with Key to the Scriptures" (p. 539) Mary Baker Eddy writes. "God could never impart an element of evil, and man possesses nothing which he has not derived from God." Then she continues with the questions: "How then has man a basis for wrong-doing? Whence does he obtain the propensity or power to do evil?" These are questions that Christian Science is answering not in mere words but in demonstration of the truth of being.

Evil is the result of the false human concept of the nature of God and man's relation to Him, and of the mistaken belief that there is another power equal to or greater than God. Just a moment's meditation will bring to thought how completely unreal, because unknown to God, is danger, and that safety is spiritual. Safety and danger are direct opposites and cannot be found together. 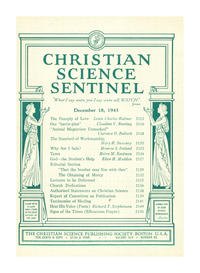