One afternoon a little girl, six years of age, returned from school, burst into the house almost in tears, and running to her mother exclaimed, "I don't want ever, ever to go back to that school again."

Her mother was amazed to see this usually cheery and light-hearted child so resentful and perturbed. She had always been a sincere little Christian Scientist, quick to forgive and to forget. She had often worked out her own problems since starting in the Christian Science Sunday School at the age of three, and, as a rule, misunderstandings among her playmates were seldom brought to her mother's attention. But on this particular afternoon, resentment had closed the door on love, and angrily she related an experience which seemed very unkind and unjust to her childish thought. "All just because I couldn't cut out an elephant in art class," was the indignant explanation. 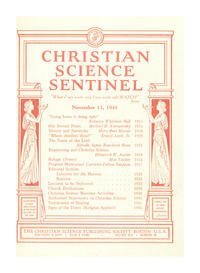