Gratitude compels me to state...

Gratitude compels me to state publicly a few of the incomparable benefits given to me by Christian Science. At first I did not understand it at all, though I liked the sound of its words. My first attempts to practice its precepts and to demonstrate its Principle were faulty, but I was protected from harm. At last I became very ill with asthma. My healing was slow, for I had much to learn of Truth. When the light of divine intelligence finally controlled my thinking I was healed quickly. In a very short time my weight and strength were normal, to the amazement of relatives who were opposed to Christian Science. This healing took place some years ago and has been permanent.

I have experienced many other physical healings, some with the help of a patient, loving practitioner, and others that have been brought about through my own understanding of Truth. A sprained ankle, swollen and discolored, responded almost at once to treatment. The temptation presented itself to rest the foot. A relative who had suffered bad aftereffects from a similar trouble had been criticized for not doing this; but I knew I had work to do that evening which needed to be done, and that Mrs. Eddy has said (Science and Health, p. 385), "Whatever it is your duty to do, you can do without harm to yourself." So I stayed actively on my feet all the evening, and in the morning all pain, discoloration, and swelling were gone.

Send a comment to the editors
NEXT IN THIS ISSUE
Testimony of Healing
I had attended an orthodox Sunday... 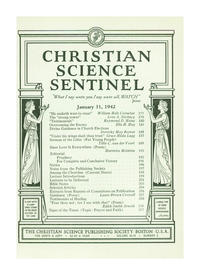