Christian Science—Its Challenge to Its Youth

"I have been much impressed with the devotion you Christian Scientists show to your church," someone recently remarked to the writer. He added: "I lay it largely to the fact that you have turned to Christian Science of your own volition. In other words," he said, "you have not inherited your religion from your parents as have most of us; and that gives a certain vitality to your church. However, I shall be interested to see if your children, who have been brought up in Christian Science, continue to show the same devotion to the church that you have shown."

Such a statement is thought-provoking and should be a challenge to every young Christian Scientist. Of course, no one really can be "born" a Christian Scientist or "inherit" his parents' religion. To be a sincere student of Christian Science means a voluntary adherence to the teachings of its Discoverer and Founder, Mary Baker Eddy, and an earnest individual effort to live its teachings. It is indeed a fortunate boy or girl who has been brought up in a home where the members of the family are striving to practice Christian Science in daily life, and who has attended the Christian Science Sunday School. Such helpful influences will undoubtedly guide him to become an active Christian Scientist of his own choice, when old enough to make his decision.

Send a comment to the editors
NEXT IN THIS ISSUE
Article
It seems evident that an effort is being made in your... 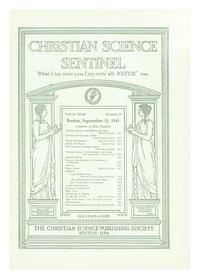