I should like to express my gratitude for Christian Science,...

I should like to express my gratitude for Christian Science, not only for the many healings and blessings I have received from its study and application, but with the hope that someone suffering from similar conditions may profit by my experience.

In 1936, after several years of observation by physicians, I was X-rayed and was said to be suffering from pulmonary tuberculosis. My condition grew worse, and I was ordered to go to a western city to be treated by a specialist. On reaching this city I had completely lost the use of my voice. After an examination it was said that I also had tubercular laryngitis. It was decided that it would be necessary for me to submit to three or more operations. After these operations I grew worse instead of better, and I came to a small sanitarium near my home, to spend the short time allotted me near my family. After remaining there thirteen months, I was again examined by a throat specialist, and it was said that man's efforts could never enable me to speak again.

Send a comment to the editors
NEXT IN THIS ISSUE
Testimony of Healing
I am deeply grateful for all that the study and application... 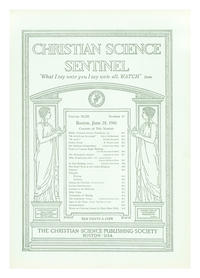