Before coming into Christian Science, a man directed his attention to one such school, but without much faith in its ability to unlock the treasures of spiritual truth. Like the woman we read of in the Bible, who "had suffered many things of many physicians, and had spent all that she had, and was nothing bettered, but rather grew worse," he too was suffering from what physicians had declared to be an incurable complaint.

Send a comment to the editors
NEXT IN THIS ISSUE
Article
"Wilt thou be made whole?" 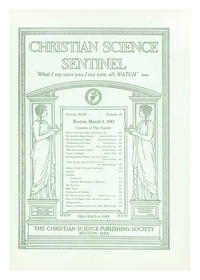