In an article which appeared in your paper recently,...

In an article which appeared in your paper recently, Christian Science was erroneously classified with Coueism and spiritualism, and as being similar to the mystic therapeutics in which Rudolf Hess is said to have been interested.

Permit me to state categorically that there is no mysticism in Christian Science, nor has it any resemblance or affinity to those forms of thought. Mary Baker Eddy, in her major work, "Science and Health with Key to the Scriptures," writes (p. 80): "I entertain no doubt of the humanity and philanthropy of many Spiritualists, but I cannot coincide with their views. It is mysticism which gives spiritualism its force. Science dispels mystery and explains extraordinary phenomena; but Science never removes phenomena from the domain of reason into the realm of mysticism." Further, she devotes a whole chapter in the same book to denouncing animal magnetism, and in this connection she also writes (ibid., p. 144): "Human will-power is not Science. Human will belongs to the so-called material senses, and its use is to be condemned. Willing the sick to recover is not the metaphysical practice of Christian Science, but is sheer animal magnetism."

Committee on Publication for Egypt,

Send a comment to the editors
NEXT IN THIS ISSUE
Article
The Knoxville Journal recently carried an article which... 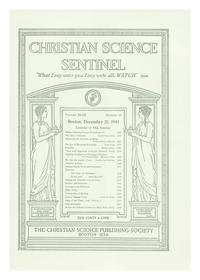