A MOST inspiring story of good companions is to be found in the fifth chapter of Luke's Gospel. A man suffering from the palsy was unable to walk and had to be carried in a bed. We see that friends of the sick man played a large part in his healing. They carried him on his couch to Jesus. The crowd was so great, however, that they could not get into the house through the doorway.

Here the faithfulness of true companionship was shown. His friends did not allow themselves to be turned back because of the crowd, but they set about finding other means of bringing the sick man into the presence of Jesus. It is evident that they loved him, and wanted him to be well. They took him to the housetop, removed the tiling from the roof, and let him down "into the midst before Jesus." 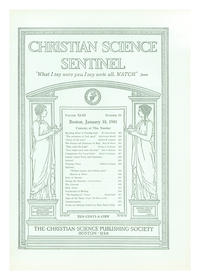