"There is no fear in love"

A medical doctor who is a member of the staff of a large hospital in New England was recently quoted in the press as having said that many symptoms of so-called heart disease often regarded as alarming need not be so considered. After naming some of these symptoms, he is reported to have said, in substance, that an affected heart did not necessarily mean disability, chronic invalidism, or early death, and he added that there is altogether too much apprehension about the rate of the pulse, and so forth.

Such statements by an enlightened physician of presumably wide experience are reassuring to those who are inclined to be apprehensive regarding physical symptoms, for they tend to alleviate fear. However, the destruction of fear in human consciousness is not to be found in statements such as that quoted above, but in declarations like those of the Apostle John: "There is no fear in love; but perfect love casteth out fear: because fear hath torment. He that feareth is not made perfect in love." Referring to this passage, on page 410 of "Science and Health with Key to the Scriptures," its author, Mary Baker Eddy, says, "Here is a definite and inspired proclamation of Christian Science." 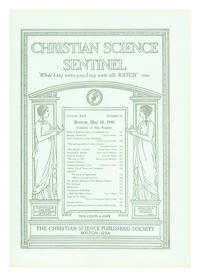