Men think much about resting from their labors and taking an occasional vacation in order to escape from the round of daily duties which have seemed to become irksome and monotonous.

In Genesis it is recorded that "on the seventh day God ended his work which he had made; and he rested on the seventh day from all his work which he had made." In giving the spiritual interpretation of this text, Mary Baker Eddy writes in part (Science and Health with Key to the Scriptures, pp. 519, 520): "God rests in action. Imparting has not impoverished, can never impoverish, the divine Mind. No exhaustion follows the action of this Mind, according to the apprehension of divine Science. The highest and sweetest rest, even from a human standpoint, is in holy work." These words show us that real rest is found in changing the basis of thought from matter to Mind, thinking less of material and worldly accomplishments, turning away from human desires to the things of Spirit, the only realities. 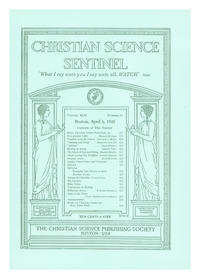