It is a great joy to testify to the unquestionable healing...

It is a great joy to testify to the unquestionable healing through Christian Science of serious sicknesses, and thus perhaps to instill courage and hope in many people suffering from conditions similar to that from which I have been liberated.

As a young man I had a fall which caused hip disease. An operation was performed, but the difficulty was only alleviated. Once or twice nearly every year this condition, which had developed into tuberculosis, confined me to a sickbed for weeks or months. I can no longer state how often I was operated upon during all those long years, but I spent a relatively high percentage of my time in hospitals and sanatoriums.

Send a comment to the editors
NEXT IN THIS ISSUE
Testimony of Healing
I wish to bear testimony to the healing power of God,... 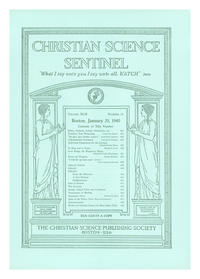