Christian Science was presented to me in 1915, when I was in the depths of melancholia, the result of an inherited and educated fear of evil. I began at once to read my neglected Bible, and also "Science and Health with Key to the Scriptures" by Mary Baker Eddy. I had found no comfort in the church to which I had belonged, or in material remedies, and I knew, after very little study, that if Christian Science could not help me, nothing else could. Our small son also was ill and was becoming slowly more debilitated. The doctors had not been able to diagnose his illness or to cure him. He was immediately helped as my thought improved, and ultimately was healed. It was years before the melan cholia entirely disappeared, but in those years I saw healings for myself and for my family of five, of pneumonia, autointoxication, prolapsus—for which a support had been worn—intestinal tuberculosis, anemia, rheumatism, and several children's diseases.

I had treatment for the melancholia from time to time when the days seemed darkest, and I am more grateful than I can say for the patience, consecration, and love the Christian Science practitioners always showed to me. One day a practitioner said to me: "When these morbid suggestions and fearful thoughts come to you, instead of turning from them, face them and challenge them. Say to them: 'Where do you come from? If you are not good, you do not come from Mind, God; you have no power and I do not have to think such thoughts.' " I followed this admonition persistently that day, gaining more and more dominion, and when I awoke the next morning, it seemed as though I had come out of a dark tunnel into the sunshine. The healing has been permanent.

Send a comment to the editors
NEXT IN THIS ISSUE
Testimony of Healing
Words alone fail to express the gratitude and love that... 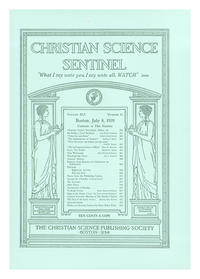