I wish to thank the management of this Broadcasting...

Correction prepared by Israel Pickens, Committee on Publication for the State of Alabama,—which was read over Station WMFO, Decatur, Alabama

I wish to thank the management of this Broadcasting Station for the privilege of correcting a statement made by a minister recently over this station when he said substantially, "There are many who blaspheme the Holy Ghost and turn many simple seekers away from the spirit of God, such as Christian Scientists, etc."

The minister who made the above statement concerning the religion of Christian Science evidently has been misinformed as to its teachings, and because of this fact he has undoubtedly allowed prejudice to actuate his criticism. While Christian Scientists regret the necessity of having to make correction of incorrect statements concerning their religion, yet it would constitute an imposition upon the public to allow such to go unnoticed and uncorrected.

Send a comment to the editors
NEXT IN THIS ISSUE
Article
In an interesting article in a recent issue of Dominion a... 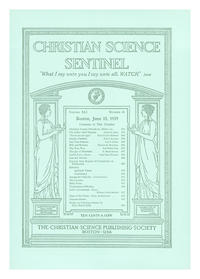