My attention was first drawn to Christian Science in...

My attention was first drawn to Christian Science in the year 1898, through my efforts to help a friend who had been forced to give up business because of ill-health. When I called to see him one day at his home I was told that the doctors had given him only a few days longer to live. About two weeks later I was very much surprised to meet him on the street, and asked him for an explanation. He told me that there were people in the city who called themselves Christian Scientists, and that he was having treatment from a man known as a Christian Science practitioner, and was getting well again. Soon afterward he went back to work, fully recovered.

About the time this occurred, a young woman in our home was sick, and the doctor in attendance told me he could do nothing more for her. The same practitioner was asked to help the girl, and in a week's time she was well again. A short time later I had word that my sister-in-law, who lived in the country, was sick. I went to see her and learned that three doctors had given her up. She was brought to my home, and in one week was entirely well, through the work of the same practitioner.

Send a comment to the editors
NEXT IN THIS ISSUE
Testimony of Healing
My grandfather, who is not a Christian Scientist, had... 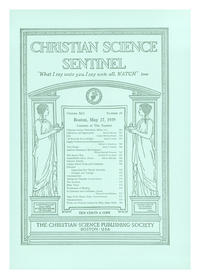