When Mrs. Eddy wrote in "Science and Health with Key to the Scriptures" (p. 494), "Divine Love always has met and always will meet every human need," she set forth in simple language a truth of vital import to humanity. Statements such as this, which challenge the generally accepted views of life, are met in many quarters with incredulity. The Bible, of course, abounds in promises of good things to mankind, but their practical fulfillment has often been considered remote from daily experience. Release from tribulation and the prospect of peace in some vague hereafter have, in one form or another, been part of the doctrine taught by the churches. But such teachings exhibit a wide divergence from the inspired declarations of Christian Science. Mrs. Eddy's statement quoted above conveys a definite promise, realizable here and now.

Human needs are, indeed, the daily concern of men and women the world over, in their ceaseless struggle to rise above the anxieties of life. Everywhere mankind is faced with problems, all too often seemingly insoluble. No mortal is free from the besetment of fear in one form or another. 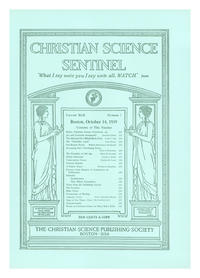