The wilderness journeyings of the children of Israel may be compared to the experiences of all mankind; and this Bible story, studied in the light of the writings of Mary Baker Eddy, proves the comparison to be a fitting one. Was not each progressive step from Egyptian bondage into the promised land of Canaan actuated by divine intelligence and guidance? Did not every trial of the Israelites afford an opportunity for a demonstration by their leader, Moses, of the power of Mind over material beliefs and conditions? Were they not learning from these experiences to turn from false gods to reliance on the one and only God? Similar steps are being taken by the Christian Scientist, today, in his journey from the land of bondage imposed by sense testimony to the haven of Soul.

After the Israelites, under Moses' guidance, had been led forth from Egypt, we are told of many instances which showed the presence of the sustaining power of Mind. Yet, the people murmured against God, demanding to know if it would not have been better for them to have died in Egypt, where they "sat by the flesh pots," rather than perish of hunger in the wilderness! 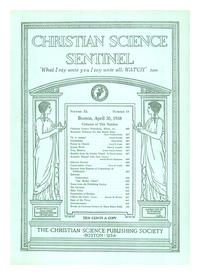