How true of mortal man are the words of Eliphaz the Temanite: "Man is born unto trouble, as the sparks fly upward" (Job 5:7)! In the cradle he has to contend with the troubles incidental to infancy; in childhood and youth he is confronted with the difficulties peculiarly associated therewith; and manhood has its problems and trials which necessitate constant watchfulness and the exercise of those spiritual qualities which alone can secure their solution, and the victory.

The difficulties which confront mankind may be classified under three heads—the physical, the moral, and the intellectual. The physical difficulties embrace the problems usually associated with materiality, such as sickness or disease, lack or poverty. Under the moral there are the imperfections of character, including all manner of sin, and embracing jealousy, envy, malice, anger, revenge, hate, covetousness, and lust. And under the intellectual we have the difficulties associated with ignorance, immature judgment, lack of power to reason logically and accurately. Mortal existence, that is, existence as it presents itself to mortal or material sense, thus presents a shorter or longer period beset by trials necessitating constant overcoming. 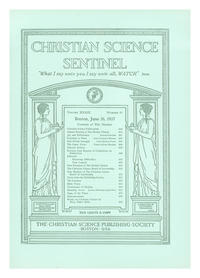