In the Post of June 8 you review a foreword to a volume...

In the Post of June 8 you review a foreword to a volume of essays entitled "The Church and the Twentieth Century." You quote a certain bishop as stating that "there is an element of unreason in man," and he gives as an instance of "the power of unreason in religion" the fact that though "the great halls in our industrial cities would be well-nigh empty for a lecture by a master of philosophical theology: they are filled to overflowing by the preaching of the Four Square Gospel or of Christian Science."

On behalf of Christian Scientists I respectfully submit that the large audiences that are attracted to lectures upon Christian Science are an indication of the yearning of mankind for a provable and practical application of our Master's teaching in its fullest aspect, and that thousands upon thousands are living fuller, freer, and happier lives because of this teaching.

Send a comment to the editors
NEXT IN THIS ISSUE
Article
In a recent article in the Appenzeller-Zeitung, Christian Science... 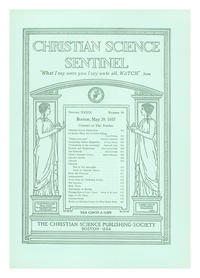