"Many years ago the author made a spiritual discovery,...

"Many years ago the author made a spiritual discovery, the scientific evidence of which has accumulated to prove that the divine Mind produces in man health, harmony, and immortality." So states our revered Leader, Mary Baker Eddy, on page 380 of the Christian Science textbook, "Science and Health with Key to the Scriptures." It is with a desire to acknowledge and express gratitude for such "scientific evidence" in my own experience that I offer this testimony.

Send a comment to the editors
NEXT IN THIS ISSUE
Testimony of Healing
Permit me to tell of some of the good that Christian Science... 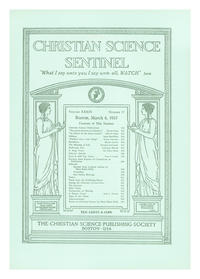