In an article called "Love Your Enemies," Mary Baker Eddy says (Miscellaneous Writings, p. 12), "Hate no one; for hatred is a plague-spot that spreads its virus and kills at last." This might easily be understood to mean, also, Hate nothing; for obviously it is the hatred that harms the one who indulges it, whether the hate be entertained for a person, a thing, or a circumstance or condition. The object of the hatred is of secondary importance, so far as the hater is concerned. It is the subjective condition of hatred that, in belief, does the harm. Therefore, what one and all need to avoid is the error of entertaining a sense of hatred.

The article referred to also contains the following helpful statement, showing the impersonal nature of hate or enmity (ibid., p. 10): "We have no enemies. Whatever envy, hatred, revenge—the most remorseless motives that govern mortal mind—whatever these try to do, shall 'work together for good to them that love God." This shows that hatred and enmity are impersonal, unreal beliefs of mortal mind, and that one's only enemy, therefore, is enmity. Jesus evidently was well aware of this fact, as the Gospel record proves. Perhaps no one ever had greater reason to believe in the existence of enemies and the reality of hatred than he, but even in the most trying situations of which it is possible to conceive, he refused to hate and refused to act as though he believed enmity to be personal.

Send a comment to the editors
NEXT IN THIS ISSUE
Article
Articles, Poems, and Testimonies 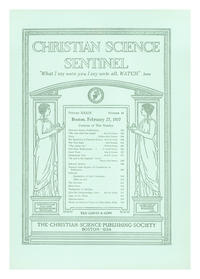