In Proverbs we read, "Where there is no vision, the people perish." The word "vision," understood in Christian Science, signifies that clear mental perception which recognizes God, Spirit, as All-in-all, and man as "the expression of God's being," as defined by Mrs. Eddy on page 470 of "Science and Health with Key to the Scriptures."

Because of the power which this vision bestows, mortal mind, the counterfeit of immortal Mind, is apparently ever active in its efforts to annul it. How often does the suggestion come that spiritual ideals are impracticable; that in a world believing in the reality of matter there is no place or support for those ideals! The constant aim of the materialist is to keep others down to the same dead level as himself. Yet, "where there is no vision, the people perish." 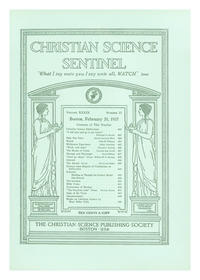