"Those things which cannot be shaken"

Many, today, are finding themselves disturbed and apprehensive over apparently disintegrating social tendencies, iconoclastic attacks upon time-honored institutions, and calumnious treatment of revered personages of the past and present. They are encountering widespread discontent and distrust, even such whisperings in their own hearts, and are fearful lest all culture, our civilization, even Christianity, be swept away.

To these anxious ones, the explanation of such mental and physical upheavals given by the writer of Hebrews should bring enlightenment as well as reassurance. The shaking of earth and of heaven by the utterances of the voice of Truth, he declared, "signifieth the removing of those things that are shaken, as of things that are made, that those things which cannot be shaken may remain." Consonant with these words is the statement of Mary Baker Eddy in the Christian Science textbook, "Science and Health with Key to the Scriptures" (p. 267), "Every object in material thought will be destroyed, but the spiritual idea, whose substance is in Mind, is eternal." 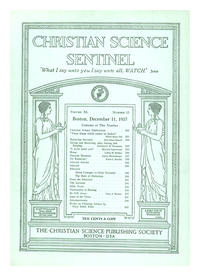