In your issue of June 25 you quote from a pamphlet...

In your issue of June 25 you quote from a pamphlet certain allegations against Christian Science. As these are misleading, I trust you will permit me to submit the following remarks. Mrs. Eddy, the Discoverer and Founder of Christian Science, pays generous tribute in her writings to the work of the medical faculty in their unselfish efforts to alleviate human suffering. She also points out, however, that medical science offers no real cure for disease, but that the spiritual method used so successfully by Christ Jesus is still available today in proportion as Jesus' teachings are understood. A system which teaches that we should follow the example of the Master and obey his commands with regard to healing, and which recognizes spiritual methods as being superior to physical, should not be unacceptable to Christians. The assertion that many helpless children are caused unnecessary physical suffering and even death by being placed under Christian Science treatment, is fallacious. Christian Science practitioners observe and obey all legal requirements in regard to children and advise parents and guardians of children to do so. An adult, of course, is entirely free to select whatever method of treatment he wishes, and it is only just to state that many of those healed under Christian Science treatment turned to it only after material methods had failed them.

The writer of the pamphlet further suggests that, because people who attend Christian Science services give the impression of being in comfortable circumstances, therefore Christian Science has no message for the poor and afflicted. A contrary deduction would be more in keeping with the facts, since practically all of these people have been victims of some form of disease, sin, poverty, unemployment, or other misfortune, and have found freedom from these conditions through the practice of Christian Science. It is also stated that because Christian Science denies the existence of human ills, social, physical, and mental, it therefore makes no attempt to cure them. Such an assumption is very far from correct. Christian Science teaches that evil and its effects do not exist as realities in an absolute sense. That is, they are not divinely created or ordained. It recognizes their seeming existence in human experience and humanity's need of salvation from those conditions. From a scientific standpoint, to assume that a diseased condition is real and then attempt to cure a reality is anomalous. To recognize that this seeming reality can be eliminated from human experience by an intelligent understanding and application of spiritual law as taught and practiced by Christ Jesus is surely both scientific and Christian.

Send a comment to the editors
NEXT IN THIS ISSUE
Article
In your issue of June 14 you report an address delivered... 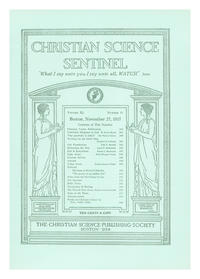