When I first heard of Christian Science I was living in...

When I first heard of Christian Science I was living in England. It was presented in this manner by my sister: "There is a little book you can buy, and when you have read it all through, you will be well." I was in a very delicate state of health at the time, having undergone two operations, one for a crushed hand sustained in an accident, and another for serious sinus trouble. Up to the time of the accident I had always had good health, but loss of blood and very much pain had reduced me almost to a shadow. Relatives and friends always thought that the shock to my nervous system caused by the accident was responsible for all my ailments. When my sister mentioned the little book I wondered if it would heal me, but I made no effort to look for it, and finally dismissed it from my thought.

When I came to America with my husband, I seemed to have better health for a few months, but the old troubles soon began again; internal trouble, sinus trouble, asthma, and many other complaints, got a foothold in my consciousness. Three more operations were performed for the sinus trouble, and two operations for internal tumors; then came a nervous breakdown. An operation on the breast was deemed necessary, and with first one thing and then another I became weary of living. In 1923, I was in four different hospitals for weeks in succession, and when at home I was in bed most of the time. I had been told about Christian Science, but I did not know that the little book my sister had mentioned years before had anything to do with it, and I flatly refused to have anything to do with this Science. Many prayers were said for me by my bedside, and also in the church of which I was a member. The pastor was very kind to me, but I was so weary of sickness that I finally decided to give up everything pertaining to religion. I had always tried to live a Christian life, as I saw it, and sickness seemed to be my only reward.

Send a comment to the editors
NEXT IN THIS ISSUE
Testimony of Healing
Nineteen years ago I was healed of a disease after three... 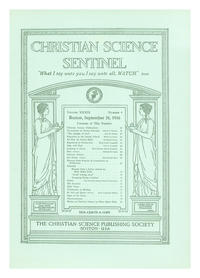