I came to Christian Science only recently, yet I have...

I came to Christian Science only recently, yet I have experienced its blessings, its power and strength, so strongly that I am deeply grateful to have found a dependable guide.

I suffered from nettle rash, which spread daily so that my body from head to foot was covered. Only the palms of my hands and soles of my feet remained free. I went from one doctor to another, tried modern medicine, and even the nature curists. Finally, my entire bill of fare consisted of fruit, olive oil, stewed vegetables, and water. Everything else was forbidden. Yet nothing helped and the disease continued. When I was told again and again that nettle rash was serious, if not incurable, the fear of such an agonizing existence and the many disappointments made me quite desperate. In this moment of great need I was led to Christian Science. I asked a practitioner for treatment, and the trouble vanished instantly and has never recurred. The change in my appearance was so striking and sudden that my family and friends noticed it at once. I should like to mention that from the day I was treated in Science I stopped the diet cure and threw away all medicines and so-called skin invigorators. Divine Love and Christ, Truth, alone saved me. The practitioner fed me mentally with much that was good and beautiful, taught me to recognize the truth about God and His power, and helped me on the way which leads from the cross to the crown. To God, to Mrs. Eddy, and to this practitioner I express my most sincere thanks.—(Mrs.) Nela Vick, Bremen, Germany.

Send a comment to the editors
NEXT IN THIS ISSUE
Testimony of Healing
Thirty-four years ago, after a period of doctoring, the... 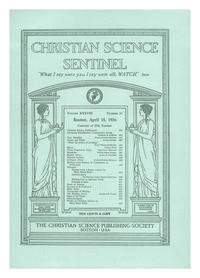