IN a characteristically arresting statement on page 17 of "Unity of Good," Mrs. Eddy sets forth the results of alliance with divine power. Her words, written as a scientific explanation of Emerson's injunction, "Hitch your wagon to a star," are, "I say, Be allied to the deific power, and all that is good will aid your journey, as the stars in their courses fought against Sisera. (Judges v. 20.)" Examination of this statement discloses our Leader's assurance of the practical possibility of forming here and now such an alliance, with the result of bringing to one's aid the all-power, the omnipotence, of infinite Mind; of God, who is infinite good. Even a brief contemplation of such a possibility will disclose the measureless benefit which is here set forth. Sisera may be regarded as the symbol, the personification of evil, an "enemy of the Lord": and as such he was destroyed. In spite of the utmost efforts of error, of the Siseras of mortal mind, to obstruct one's path, to harass and destroy, the victory will be on the side of him who recognizes and claims man's oneness with the Father, with God, the source of all being, of all reality.

This brings us to the situation which enabled Mrs. Eddy to make so vigorous a declaration. How could she be so assured of the beneficent results of alliance with God? Because she knew that man, the real man, is the son of God, His reflection and witness. And as such, man is forever allied with God, divine power; for man as reflection can never be apart from the source of his being. In other words, God and man are one, inseparable and coexistent now and forever. 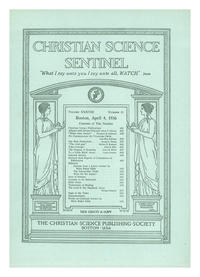