Among acts of governmental procedure, perhaps none seems more impressive or more inspired than the Emancipation Proclamation which Abraham Lincoln issued to his country. The noble act, so bravely performed, enshrined Lincoln as a fearless defender of the cause of personal liberty. It showed him as a man whose appraisal of freedom and of humanity was great enough to enable the truth of which Christ Jesus spoke to shine through him. Had no other worth been attached to him as President, this proclamation alone would ennoble American history.

Following closely upon this event came the discovery of Christian Science by Mary Baker Eddy, a greater emancipator. The scientific interpretation of the Scriptures was given to the world by her, and it is being accepted as the logical explanation of Christ Jesus' teaching by a large part of humanity. Nothing slavish can hide from its light, nothing enslaving can escape its loosening power, nothing enslaved but its love and compassion can set free. 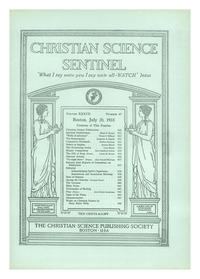