It is good to read that people are beginning to realize...

It is good to read that people are beginning to realize that "sickness is a violation of God's law." As reported in your last issue, a certain clergyman is in agreement with the teachings of Christian Science on this point; but he is also quoted as saying he "could not think how Christianity or true Science came into their [Christian Science] scheme at all." In answering this thrust I may say that criticism of this kind is seldom heard in these days.

Send a comment to the editors
NEXT IN THIS ISSUE
Article
The station announcer made the statement: Good afternoon,... 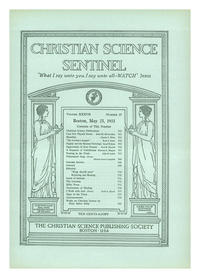