In the fifth chapter of his Gospel, John describes a healing wrought by Christ Jesus which, in the light of Christian Science, is of vital interest to men today as it was to those who witnessed this remarkable exhibition of spiritual power. Near one of the gates in the wall of Jerusalem was a pool whose waters flowed intermittently, or perhaps bubbled forth somewhat like a thermal spring. Superstitious belief led men to imagine that "whosoever then first after the troubling of the water stepped in was made whole of whatsoever disease he had." Hence many sick, blind, and impotent people looked to these waters for cure. One lying there who had been ill for nearly forty years was addressed by Jesus, who evidently discerned that discouragement regarding material means had prepared the man's thought for response to spiritual power; and the man was made whole immediately.

All the others at the pool of Bethesda might have likewise been healed had they been receptive to the saving and life-giving message of the Messiah, instead of expectantly and exclusively centering their thought and endeavor on the nonintelligent water in the pool. This perversity is explained in "Science and Health with Key to the Scriptures" where Mrs. Eddy, in referring to the carnal mind and its obliquity, writes (pp. 186, 187): "If mortal mind knew how to be better, it would be better. Since it must believe in something besides itself, it enthrones matter as deity. The human mind has been an idolater from the beginning, having other gods and believing in more than the one Mind." So these poor sufferers continued in bondage to ignorance and idolatry, believing, however, that the bonds which fettered them were physical and perhaps God-sent. 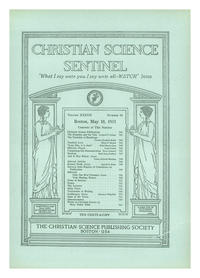