It is a significant and interesting fact to observe, in connection...

Extracts from an address given by Bernard C. Duncan, before the Christian Science Organization at the George Washington University,—Washington, District of Columbia, November 11, 1934

It is a significant and interesting fact to observe, in connection with Christian Science Organizations at universities and colleges, that what we might term the first public experience or appearance of our Way-shower, Christ Jesus, occurred early in his career when, at the age of twelve, he remained in the temple conversing with the educated men of his day. According to Luke, he was found "sitting in the midst of the doctors, both hearing them, and asking them questions. And all that heard him were astonished at his understanding and answers." Jesus' spiritual ideas and expression were more than intellectual knowledge and human experience, much beyond the learning of the period. His education was superior in every respect, for it was founded upon divine Truth.

Let us note the attitude toward schooling expressed by the Discoverer and Founder of Christian Science, Mary Baker Eddy. On page 195 of the Christian Science textbook, "Science and Health with Key to the Scriptures," Mrs. Eddy writes, "Academics of the right sort are requisite." In the same paragraph she defines the goal of education by saying, "Observation, invention, study, and original thought are expansive and should promote the growth of mortal mind out of itself, out of all that is mortal." Thus the highest aim should be that of spiritual growth. We might term this the truly "higher education." 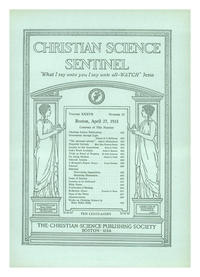