It is with a heart full of gratitude for the wonderful...

It is with a heart full of gratitude for the wonderful good that Christian Science has brought to us in the past twenty-five years that I send this testimony. The first healing in our home was that of our son, then a baby, who was healed of a stomach and intestinal trouble for which the doctors could do nothing. Later our little daughter was healed overnight of what was called Paris green poisoning.

The truths of Christian Science are invaluable in the rearing of children. Six years ago, my husband and I decided, as both our children were away at college, that we would take a young boy and give him the advantages that he would not otherwise have. Accordingly we took a twelveyear-old boy from the state. I had no desire to know his history and so did not look into it. He was placed in the Sunday school and soon began to learn the value of the truth. He was frail and delicate and had several physical ailments, one of them serious. Only Christian Science could destroy the various phases of ill disposition that he seemed to express, as well as heal him of the bodily ailments. The healing came gradually but surely. We returned him to his mother a short time ago, a fine, healthy young man. The state worker who saw him shortly before he left expressed her happy surprise at his appearance and development.

Send a comment to the editors
NEXT IN THIS ISSUE
Testimony of Healing
When Christian Science was first brought to my attention... 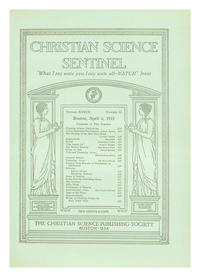