Through Christian Science our family has been wonderfully...

Through Christian Science our family has been wonderfully blessed in many ways during the last ten years. I have been healed of deafness supposedly caused by influenza. When relatives insisted that I have a physician, the latter said, "You will never hear again, as both eardrums are gone," but Truth prevailed and my hearing came instantaneously. That was over nine years ago. I hear perfectly.

I have been healed of the need of wearing glasses; our children have been healed of many so-called children's diseases, including scarlet fever. Some healings were slow, others were quick. I have undergone painless childbirth, whereas my previous experiences in that regard had been most discordant ones.

Send a comment to the editors
NEXT IN THIS ISSUE
Testimony of Healing
It is with a heart full of gratitude that I give this testimony... 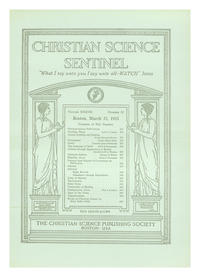