When we repeat the Lord's Prayer, we include the petition, "Thy will be done in earth, as it is in heaven." In her textbook, "Science and Health with Key to the Scriptures," our Leader gives the following spiritual interpretation of this sentence (p. 17): "Enable us to know,—as in heaven, so on earth,—God is omnipotent, supreme." The implication is plain—there can be no will but God's will. It is clear that God, being divine Principle, must be omnipotent, omnipresent, and omniscient; and it is generally accepted that these verities express the nature of God. Since He is omnipotent, having all the power there is, there is no will to oppose Him even momentarily. Since He is omnipresent, there is no place where His creation is not subject to His will. Since He is omniscient, He foreknows everything real, and nothing can be known that is in opposition to His will.

These facts become plainer when we remember that man is the reflection of God. In illustrating this point, Mrs. Eddy draws a lesson from the mirrored reflection (Science and Health, p. 515). So we may think of a man standing in front of a mirror and looking at his own image. No one would say that the image could do anything that the person reflected does not do. If the image raises its arm, it is because the person reflected does so; and the image must raise its arm at the same time and to the same degree. The mirrored image has no will, volition, or desire of its own, and one cannot conceive of its having them. If we knew thoroughly what it means to be the image and likeness of God, no one of us could conceive of himself as having any will, volition, or desire apart from God. 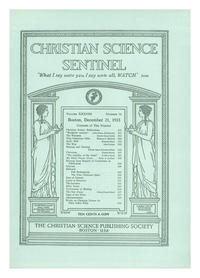