The November 12 issue of your paper contains some...

The November 12 issue of your paper contains some statements in a full-page article regarding Mary Baker Eddy which call for correction.

In connection with the Chicago Century of Progress Exposition, the National Council of Women and the Ladies' Home Journal held an open poll to determine the names of the twelve American women having the greatest influence during the last hundred years. The incident was mentioned in thirty-eight Swedish newspapers, among them Social-Demokraten, and I should like to quote the following from one of the more comprehensive reports which appeared in another Stockholm paper: "The poll aroused great interest. . . . More than a thousand names of women were proposed. At the head of the list appeared the name of Mary Baker Eddy, Founder of the Christian Science church. A great many people who are not themselves Christian Scientists, nevertheless voted for Mary Baker Eddy, simply because they admired her personality quite apart from her religious convictions."

Send a comment to the editors
NEXT IN THIS ISSUE
Article
In answer to your correspondent, I would say that all his... 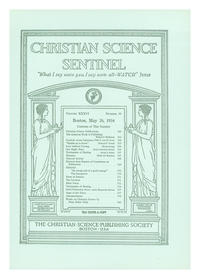