In utilizing all the agencies she had set up to spread the...

Extracts from an address given by Roland R. Harrison, Manager of The Christian Science Publishing Society, at a Literature Distribution Committee meeting held in The Mother Church on Friday evening,—February 16, 1934

In utilizing all the agencies she had set up to spread the religion of Christian Science, Mrs. Eddy early called upon The Christian Science Publishing Society to take an active part in the free distribution of the authorized literature. In the subsequent growth of our movement, changes in the methods of free distribution transferred to other hands the Society's direct part in that activity. But whether immediately engaged in the distribution work itself, or making its major contribution in the publishing of the periodicals and other literature thus distributed, the Publishing Society stands unitedly with The Mother Church and its Board of Directors in carrying on the great healing activity we are considering. The Publishing Society is and must always be deeply interested in the success of both the direct and secondary distribution of the periodicals.

To grasp the full significance and scope of any activity of our religion, our first effort should be to learn what our Leader thought and did about it. Literature distribution, we find, was very close to her heart, and there is abundant evidence that she gave to it much prayer and consideration, overlooking none of the facilities then available for the wide-spread distribution, circulation, or sale of her textbook and of the periodicals. 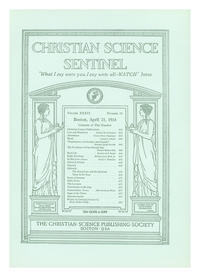