In the sixteenth chapter of Exodus it is related that the Lord sent manna to the children of Israel to sustain them in the wilderness, and "Moses said, Let no man leave of it till the morning. Notwithstanding they hearkened not unto Moses; but some of them left of it until the morning, and it bred worms." On page 35 of "Science and Health with Key to the Scriptures" Mrs. Eddy says in part, "Our bread, 'which cometh down from heaven,' is Truth." Taken literally, the above passage from the Bible might seem to indicate that this spiritual bread is perishable, but when it is viewed in the light which Christian Science throws upon the Scriptures, a clearer and deeper interpretation is discovered.

To the sincere Christian Scientist, Truth, or the daily bread which frees men from all the oppressing beliefs which are suggested to them, is expressed in the inspired pages of the Bible, in Science and Health as well as the other writings of our Leader, and in the religious periodicals issued by our Publishing Society. On page 495 of Science and Health we are told: "Study thoroughly the letter and imbibe the spirit. Adhere to the divine Principle of Christian Science and follow the behests of God, abiding steadfastly in wisdom, Truth, and Love." 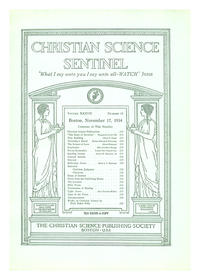