Many orthodox Christians of today find that the terminology of their religion fails to convey to them a definite and practical meaning. A clear understanding of such terms is as requisite to practical Christianity as is a similar knowledge in applied chemistry or in business.

To the early disciples the Christian religion was so real and practical that it dominated all things in their lives, and was so effective that through it the sick were healed and the dead were raised; and the whole world was destined to be impregnated and benefited by its teachings and practice. To them the terms "God," "baptism," "cross" represented vital teachings, clear, definite, and practical. Unhappily many religious terms, designed to express potent spiritual teachings, later became blurred and vague in the thoughts of men. They became merely doctrinal terms associated with various religious creeds or observances, apparently having little connection with everyday living. One of the inestimable benefits of Christian Science has been the spiritual interpretation in this age of the original and practical meaning of these terms. Beginning on page 579 of "Science and Health with Key to the Scriptures" by Mary Baker Eddy is a chapter entitled "Glossary," which is of great value in its elucidation of many Scriptural terms. 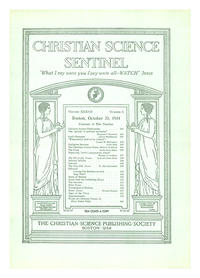