Should an astronomer be asked how it is possible to foretell the occurrences of various astronomical phenomena, he would probably reply that by understanding and adhering to certain mathematical rules astronomical calculations can be accurately worked out. Doubtless such an answer would be accepted without question. It is not so generally believed, however, that God is the divine Principle of the real universe, and that man, created in God's image and likeness, is perfectly governed and directed by the operation of spiritual law, the order of which is illustrated by "Mazzaroth in his season" and "Arcturus with his sons."

That this fact is not apparent to mankind in general is due to the various conflicting and false concepts of Deity which are held to tenaciously. But the Science of Christianity, or Christian Science, reveals God and man as inseparably correlated. No creedal religion or philosophic reasoning can give a demonstrable understanding of this fact; and without such an understanding of God and of man's true relationship to Him individuals are unable to conceive of themselves as being harmoniously directed by immutable divine law. Consequently, they drift into the belief that their lives are largely influenced and dominated by so-called material laws and conditions which may sometimes appear to be good, and oftentimes dire. 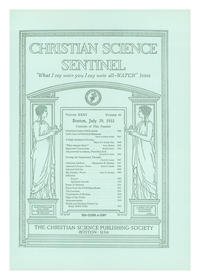