According to Scripture it is evident that pestilence and plagues were regarded by the Hebrews as punishment for defiance of and disobedience to God's will or law. Following Pharaoh's defiance of the demands of Principle as voiced by Moses, the Egyptians were visited with various plagues; and the children of Israel, during their wilderness wanderings, also suffered several tragic experiences due to their disobedience to moral and spiritual law. The Israelites supposed that God had sent the ills upon them, whereas it is plain that the pestilence and pain were punishments self-inflicted through their disobedience. The mental origin and nature of sickness, including so-called contagious diseases, is thereby plainly shown. Moses and other Old Testament characters voiced promises of protection from sickness for those who conformed to the law of God. The Psalmist sang, "Because thou hast made the Lord, which is my refuge, even the most High, thy habitation; there shall no evil befall thee, neither shall any plague come nigh thy dwelling."

However, the important truth as to the origin and nature of so-called disease has long been lost sight of because religious teachings have become permeated with medical theories and material beliefs, and men have been falsely educated to regard both health and sickness as physical conditions. Mankind's fettering fears have been multiplied by the process of examining throats instead of thoughts and looking to nonintelligent medicine rather than divine Mind for healing and protection. Repeatedly it has been shown that public warnings against contagious diseases and advertising of them by newspaper accounts have so stirred and fanned human fears as seemingly to spread the trouble. This has been observed and commented upon by some honest doctors of medicine who have warned against such harmful procedure. 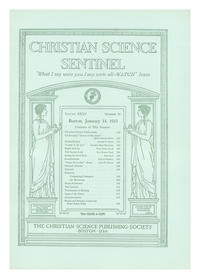