It is with gratitude and joy that I testify to the healing...

It is with gratitude and joy that I testify to the healing power of Christian Science. Until six years ago I had been an invalid for nearly ten years with an organic trouble diagnosed by physicians as colitis. I spent many weeks of each year in sanitariums and hospitals, gaining only temporary relief, and believing all these years that sickness was an act of Providence.

Finally, I was led to take up the study of Christian Science. In about three months I realized somewhat that there was only one creator and one creation, and that both are wholly good. Then I began to see that disease exists only in so-called mortal mind. I studied the Bible Lessons in the Christian Science Quarterly and the ninety-first Psalm daily, finding there the spiritual truths and promises of God's protecting care, which led to complete healing. Since then I have had many other healings: colds have been healed in a few hours as I have realized that "nothing inharmonious can enter being, for Life is God" (Science and Health with Key to the Scriptures, by Mary Baker Eddy, p. 228).

Send a comment to the editors
NEXT IN THIS ISSUE
Testimony of Healing
I wish to express my gratitude to God and to our beloved... 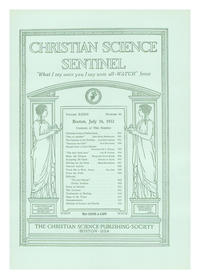