In reading the Bible Lesson in the Christian Science Quarterly one morning, a Christian Scientist read these words, and then paused to study them: "Progress is born of experience. It is the ripening of mortal man, through which the mortal is dropped for the immortal" (Science and Health with Key to the Scriptures, by Mary Baker Eddy, p. 296). At the time she seemed to be confronted by a problem which might have called itself "Legion." For a long time she had been studying the Lesson-Sermons every day, and striving to understand and apply the truth correctly, and some phases of the difficulties had been met, for which she was grateful. Always there seemed to be new problems, however, and on this particular morning she feared she was facing a crisis. Some material things already had been taken from her, and it seemed as though she would probably lose more still. Every door appeared to be closed, and, try as she would, she did not feel that she could rejoice.

It was a very beautiful April morning, and outside her window there was a cherry tree in full bloom. The wind was gently blowing the blossoms to the ground. As this woman gazed at the cherry tree, she became conscious of a different understanding of the meaning of "ripening." Suddenly she saw her own apparently trying experience as a ripening, analogous to the experience of that cherry tree. A few weeks earlier the cherry tree had been bare, but the warm spring sunshine had caused growth. The buds had swollen, and finally had opened into beautiful flowers. And now the wind was blowing away those lovely petals. At first sight this appeared to be a loss. The spectacle of the cherry tree, however, caused her to look into the future, and to see there the promise of ripened fruit. The falling blossoms then appeared to her as not something lost, but as a sign of definite progress. 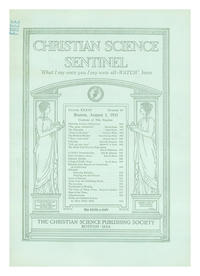