Atonement as Love for God and Man

Christ Jesus once said that "the kingdom of God is within you." Thus he stated the facts of God's nearness and man's constant abiding in Him. That man is continuously at-one with God may be said to be the spiritual theme of the Scriptures. It is a fundamental of Christianity, and it is a corner stone of Christian Science. Conscious nearness to God is the armor of a Christian Scientist. The better His presence is understood, the better armored, or protected, is the student. The thought of Immanuel, "God with us," is to be learned in Christian Science, is to be loved and to be lived, so that it may constantly be realized by us.

Because of the beauty and holiness in the thought of being at-one with God, Mrs. Eddy has devoted a chapter in her textbook, "Science and Health with Key to the Scriptures," to the subject "Atonement and Eucharist." So simple, and yet so profound, are its statements of man's oneness with God that they are gradually leavening the generally accepted doctrine of atonement. One standard dictionary of the English language already gives her opening definition of atonement in this chapter. Mrs. Eddy's self-sacrificing love for God and man is becoming more widely known by its fruits with every passing year. Surely no Christian writer before her stated so clearly the scientific implications of the atonement of Christ Jesus. Her spiritual insight solved a complex problem in theology, inasmuch as a great part of the Christian world had regarded the atonement as involving mostly expiation and physical sacrifice; then, by scholastic shifts, had attempted to reconcile such appeasements and propitiations with a loving Father's will for His beloved Son. Our Leader dissected and defined atonement as at-one-ment with God, and also struck from human consciousness the mental shackles of a man-made belief that it is impious to claim our individual atonement, or at-one-ment with God, for ourselves as the sons of God. 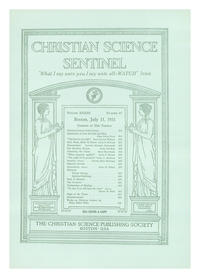