It is with a heart full of gratitude that I testify to the...

It is with a heart full of gratitude that I testify to the many blessings which have come to me and mine through the study and application of the truth as revealed to us in the textbook, "Science and Health with Key to the Scriptures" by Mary Baker Eddy.

While visiting a relative, who was an earnest student of Christian Science, I promised to read Science and Health on my return home, with the hope that it would solve some of the many problems which were confronting me at that time. This I did, and I can never be grateful enough that my eyes were opened in a measure to glimpse the wonderful truths contained in this book. Though I did not take up the study of Christian Science for physical healing, yet many healings have followed. Shortly after I began this study, a growth which I had had since a child, and which had been pronounced by a physician to be a tumor, disappeared into its native nothingness. Since then I have experienced many healings. Over two years ago heart trouble, which suddenly manifested itself, was quickly met.

Send a comment to the editors
NEXT IN THIS ISSUE
Testimony of Healing
The writing of this testimony is actuated by many... 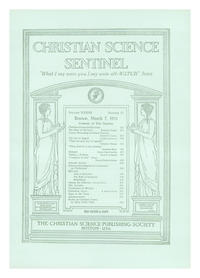