At this season of the year, with every newspaper carrying "gift" advertisements, the question is presented to a materially-minded world, What shall I give for a Christmas gift? The writer has found that to this query Christian Science gives a very good answer. But first it gives a definition and a spiritual interpretation to the words "Christmas" and "gift." Let us look at the following words of the Discoverer and Founder of Christian Science, Mary Baker Eddy (The First Church of Christ, Scientist, and Miscellany, p. 262), "Christmas to me is the reminder of God's great gift,—His spiritual idea, man and the universe,—a gift which so transcends mortal, material, sensual giving that the merriment, mad ambition, rivalry, and ritual of our common Christmas seem a human mockery in mimicry of the real worship in commemoration of Christ's coming." Surely, in the light of this illumined statement one can think of no greater gift ever given men than the understanding of Christ as the divine emanation of God.

The Apostle James had a very clear conception of the true meaning of gift-giving when he said, "Every good gift and every perfect gift is from above, and cometh down from the Father of lights, with whom is no variableness, neither shadow of turning." It is also to be remembered how, as Peter and John were about to enter the temple, they came upon the man who sat daily at the Beautiful gate asking alms. Neither Peter nor John seemed to have material things to give—and how little would it have been noticed if they had given such—but Peter gave a gift never to be forgotten when he said to the man, "Silver and gold have I none; but such as I have give I thee: In the name of Jesus Christ of Nazareth rise up and walk." Oh, what a gift! The man was healed of his infirmity, and with gratitude he leaped up and praised God, for he realized the true value of what he had received. He had glimpsed the eternal fact that he was a son of God, made in the image and likeness of his Maker. But to the too materially-minded people of that day who were worshiping in the temple, Peter's gift brought only amazement and wonder. 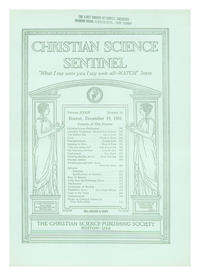